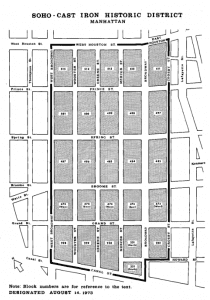 On this day in 1973, the New York Landmarks Preservation Commission (LPC) designated the SoHo-Cast Iron Historic District. Roughly bounded by Canal Street, West Broadway, Houston Street, and Crosby Street with an extension to the east, the district comprises about 500 buildings, many of which are distinguished by their ornate cast-iron facades. SUPERSTRUCTURES has conducted restoration projects on a number of buildings within this open-air museum of nineteenth century architecture. 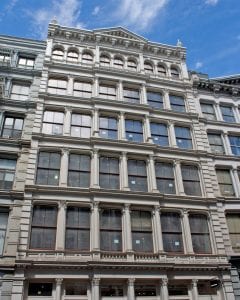 476 Broome Street (Griffin Thomas, 1872) boasts a palatial cast-iron facade ornamented with Corinthian pilasters and quoined corner piers. SUPERSTRUCTURES project for the building included restoration of the cast-iron facade, window replacement, and restoration of the sidewalk vault. We produced drawings and specifications in order to obtain the LPC’s approval for a full restoration program, as part of the owner's Zoning Resolution Section 74-711 application for modification of use for the site. 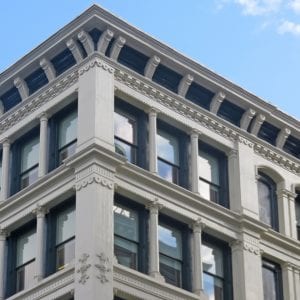 Another exemplar of the District’s style, 462 Broadway—originally the Mills & Gibb building (1880, John Correja)—features cast-iron facades on three sides. Designed in the French Renaissance revival style, it's now home to the International Culinary Center. SUPERSTRUCTURES conducted a facade condition survey of the building, produced a report detailing deficiencies in its brick masonry, mortar joints, stucco, and bluestone copings, and provided a restoration plan to remediate these conditions.

A smaller gem in the District, 31 Greene Street is a five-story residential building tucked between two cast-iron companions. SUPERSTRUCTURES was retained to conduct an examination of the building, including its facade, exterior masonry, roof, parapets, elevator and bulkhead, windows, skylights, lobby, and MEP systems. The firm developed recommendations for repairs to help the owner remediate open DOB violations and weigh options for a new elevator and other upgrades.