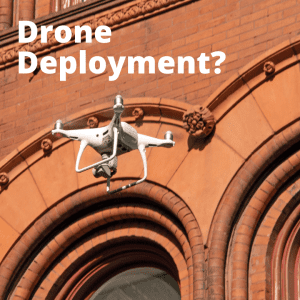 The NYC DOB just released Using Drones to Conduct Façade Inspections, and SUPERSTRUCTURES would like to thank the department for the opportunity to have contributed to its report. We’d also like to reiterate our support for allowing the judicious use of drones to facilitate the inspections required by the Facade Inspection & Safety Program (FISP).

Based on SUPERSTRUCTURES’ experience in jurisdictions outside NYC, we’ve observed that drones can be useful in at least two ways:

Of course, nobody wants drones to become the new selfie sticks. But NYC could limit drone deployment to Qualified Exterior Wall Inspectors (QEWIs) engaged in FISP inspection or repair, via a special permit akin to a CD-5.

Drone observations are not replacements for physical examinations (though they could replace some), but drone deployment could become a useful tool in the FISP tool kit as part of rational discovery program, supplementing more traditional means of access such as platform lifts, swing staging, rope access, and non-drone imaging.

With a bit of flexibility on the part of the DOB, drone use could actually expedite FISP inspections and repairs.  Ideally, rather than inflexible inspection requirements (e.g. 60’ intervals for drops and cavity wall probes), a QEWI would be able to present for DOB approval a proposed inspection program considering the building’s configuration, age, condition, construction type, etc.  The proposal could comprise a reasonable combination of physical inspection, drone imagery, physical probes, and borescope imagery—or in the case of terra cotta, 100% physical inspection. Virtually every one of our QEWI colleagues with whom we’ve discussed this would welcome this approach.

SUPERSTRUCTURES looks forward to the day when drones are cleared for takeoff and can help carry exterior restoration fully into the 21st century.