But it’s not just the largest public installation of solar panels, the BMCC installation is also the first vertical installation of solar panels in New York City.  In addition to those lying flat on the four-block-long structure’s 10,000 square foot roof, the panels have also been added to the sides of the exterior penthouse walls. The project was first proposed in 2008, but with technological innovation moving at warp speed, improvements to the design have since been made.

Great news for NYC, too.

925 photovoltaic panels have now been installed.  Collectively, these will produce 325 kilowatts of electricity, powering the Chambers Street building.  But excess power produced will also benefit the City of New York in several ways.

Two 100-kilowatt-hour batteries will house the electricity, an arrangement being worked out with the NYC Department of Buildings and the city’s Fire Department.  This will provide reserves of energy during peak solar harvesting times in the summer.

These reserves can be utilized in the event of blackouts and for emergency lighting, refrigeration and powering the College’s electrical vehicle and generators.  The city stands to benefit from the reduced strain on its electrical infrastructure.

The future is sustainable.

The City of New York has undertaken this project to reduce energy costs, improve energy efficiency and reduce the City’s carbon footprint.   Governor Andrew Cuomo’s program to increase the use of solar power in the state is also supported by the effort, contributing to a future which is more resilient and energy-efficient.

Governor Cuomo’s goal is to see New York state producing 50% of its own energy via sustainable means by the year 2030. With the BMCC project, New York City is leading the way to a robust clean energy future, in which the needs of our city and state are met. 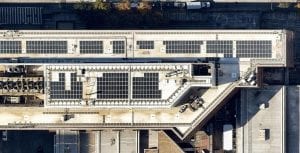 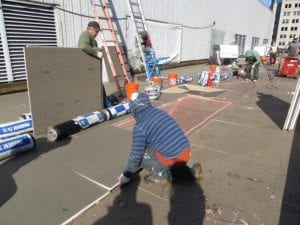 It’s projected that installation of the solar panels at BMCC will result in savings of $42,000 per year for the College.  And the energy savings are also significant.  The replacement of electricity by solar power is equivalent to removing 48 cars from the road, or power for 24 houses.

Scott Anderson, BMCC’s Vice-President of Administration and Planning says the College used an existing resource (its four-block-long roof) to create a new one – solar power.  The size of the roof makes it an ideal site for the project and an exemplary one we hope others will seek to follow.

Our collaboration with CUNY and BMCC is one we’re glad to have undertaken.  This groundbreaking project stands as an example of what can happen when disparate organizations unite to create alternative energy sources.