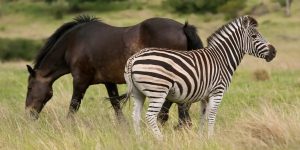 Medical school students are taught “when you see hoof prints, think horses, not zebras,” meaning that a doctor should first think about what is a more common—and potentially more likely—diagnosis. In our field of exterior restoration, there’s a crucial caveat: sometimes it is zebras. We’ve found that some conditions require our experts to look beyond the obvious.

For example, another consultant was engaged by an Upper East Side co-op with typical postwar cavity wall construction. The facade was bulging in the spandrel regions below the window sills. Probes revealed that some of the wall ties had never been installed, and that the extant fabric flashing was a commonly used PVC material. The consultant attributed the bulging to gradual deterioration of the spandrel’s integrity over time, exacerbated by the lack of wall ties and ineffective flashing, and prescribed brick replacement—a solution that would have affected 65,000 square feet, with an estimated cost of $6 million. They saw hoof prints and assumed they were made by a horse.

“Default” repairs are often warranted. However, before undertaking a project of this magnitude, the building’s board sought a second opinion from SUPERSTRUCTURES. Lo and behold, we found that the horse in question was actually a zebra. 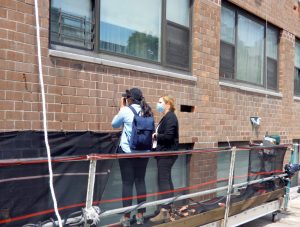 Our investigation brought several things to light: Despite the observed bulging, the facade surface exhibited no localized distress; there was no pervasive face brick spalling, and mortar joints were intact; the original flashing was still doing its job, and there were no reported leaks in the building; many wall ties (but not all) were in fact missing. Most critically, probes at several locations revealed that the observed curvature was not a symptom of facade distress, but an original condition. The building’s concrete frame was not perfectly vertically aligned, so bulges in the brick were dictated by these irregularities.

By digging deeper, we concluded that the other consultant’s proposed repair was unwarranted. Our solution compensated for the absence of original wall ties with the introduction of post-applied anchors that tied the brick veneer directly to the backup CMU, arranged so that they never penetrated the existing flashing.

The revised recommendation cost $2.5 million, saving our client time and money, with far less disruption to the lives of the building occupants. The lesson here is that due diligence to verify assumptions about a building condition and its remedy—confirming whether horses or zebras have left their marks—makes good horse sense for clients.

Think you may have a horse of a different color? Get in touch.