‹ View All Articles
June 2, 2022
Restoring the Recent Past 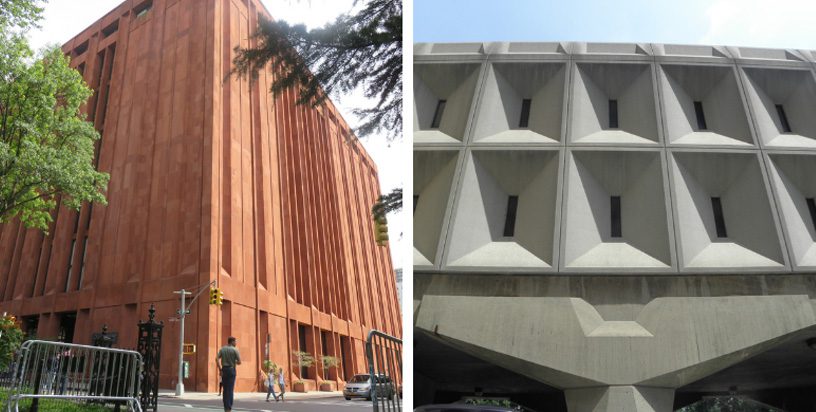 A building’s landmark status isn’t synonymous with its preservation worthiness. Both pre-modern (“historic”) and modern buildings are the same to SUPERSTRUCTURES in the sense that we don’t discriminate between ornate, 19th century terra cotta facades and glass-and-steel curtain walls.

Consider the fact that early modern buildings—of which New York has many—are already a century old. Even the Brutalist buildings of the 70s are now 50 years old. These may be short spans in the annals of architectural history, but are significant anniversaries for the interrelated building systems that are subject to deterioration from time and the elements.

With the 20th century well in our rearview mirror, there’s a lively debate over which buildings of the modern era are worthy of protected status. This effort is led by organizations like Docomomo, which promotes preservation of the architecture of the recent past. Seeing International Style and Brutalist buildings as “historic” may be a harder sell than their pre-modern counterparts, but again, we don’t favor 19th century form over 20th century function. For our seasoned team of architects and engineers, reinforced concrete and steel are just as worthy of restoration as the decorative trappings of Beaux Arts, Gothic-Revival, or Renaissance-Revival styles.

The debate over stylistic merits aside, the formidable embodied energy in modern reinforced concrete and masonry structures is a factor in favor of their preservation. One of our go-to aphorisms is that “the greenest building is the one already built.” In that sense, we’re in the business of giving new life to existing buildings, whether they’re stately cast iron landmarks or utilitarian concrete towers.

With public sentiment toward modernism shifting and historic protections in place, it’s less and less likely that many 20th century structures will be erased from the built environment. Certainly, icons of the era like Marcel Breuer’s Meister Hall at Bronx Community College (1964) and Philip Johnson’s Bobst Library at NYU (1972), which SUPERSTRUCTURES has restored, are unofficial landmarks which will endure regardless of official protections or public regard.

In any case, SUPERSTRUCTURES’ role is not to evaluate the merits of any particular architectural style; our practice is focused on preserving assets of any era through the evolving art and science of restoration.