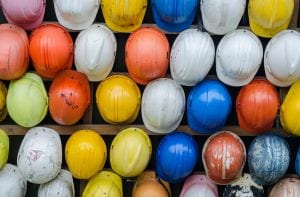 It probably won’t come as a surprise that there’s a general correlation between contractor quality and price. Contractors at the absolute high end will usually charge significantly more than their mid-range counterparts, sometimes by a factor of two. High-end contractors are generally “union shops” which accounts, in part, for the price differential. Union credentials are often required for high visibility commercial projects, but are generally not a factor for residential projects.

All contractors pay about the same price for the products and materials to be used on a project. So what contributes to variance in price among bidders? Well, some firms simply demand a higher profit. Some have a more robust operation, with more supervisors and back-office support. Some firms allocate more for site cleanup.

If there are two contractors of equal stature, one can bid lower if the nature of the project is better aligned with its innate capabilities (e.g. if a project combines brick and stone, a firm with stone masons on staff might offer a lower bid than a firm that needs to subcontract stone work).

Logistics is a big factor. A firm that has a captive sidewalk shed company, or owns its own swing staging, can choose to be more competitive. Devising a clever way to access the project (using the right combination of swing staging, permanent scaffolding, etc.) also allows a contractor to submit a lower bid for a given package of work. And tradecraft is important: a contractor that can figure out how to sequence a job more effectively (finish the work in fewer passes) has a competitive advantage.

The potential for exploitation through change orders might induce a firm to submit a lower bid if construction documents (CDs) are not tight. A contractor might see an opportunity for profit, especially if unit prices for potential change-order work have not been bid or negotiated in advance.  One contractor on the Jersey Shore owns a yacht named “The Change Order.”

Sidebar: One reason that SUPERSTRUCTURES is a favorite of public agencies, for whom change orders are toxic, is that our CDs are known for their clarity and completeness -in other words, change order resistance.

The calendar can also influence pricing. In general, from an owner’s perspective, the preferred time of year to place a project out to bid is mid to late winter. Contractor cash reserves are leaner in winter because most projects are inactive, and contractors are anxious to establish a backlog for the next construction season commencing in the spring. Late spring/early summer is arguably the worst time to solicit bids, because most contractors have their dance cards filled.

Taking all of these factors into consideration, it’s difficult to predict the low bidder among a stable of mid-range contractors, which is why owners typically invite between three and six bidders. A low bid should not disqualify a contractor, nor is it an indication of an inability to deliver a satisfactory completed project. But, unlike a public agency, private residential clients have the freedom not to go with the lowest bidder. Time spent researching bidders’ qualifications and checking references will prove worthwhile when selecting from among competitive bids.

Read Part 1 of this series here.