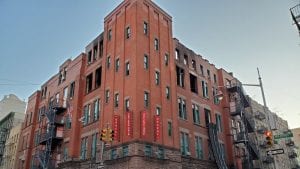 SUPERSTRUCTURES applauds the City’s decision to dedicate funds for the restoration of 70 Mulberry Street, site of a devastating fire this January which threatened total demolition of the Chinatown landmark. Built in 1892 as P.S. 23, the first public school design by celebrated school architect Charles B.J. Snyder, 70 Mulberry housed the archives of the Museum of Chinese in America at the time of the fire. It’s also the subject of a previous SUPERSTRUCTURES’ restoration project. The firm stabilized and restored the building’s brick and stone masonry facade, including its chimney, lintels, parapets, and fire escapes. 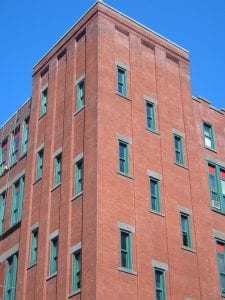 Although the historic building’s owner, DCAS, had planned to demolish and reconstruct the landmark soon after the fire, the recent announcement that the City is committed to preserving more of the building’s original fabric is good news for this irreplaceable “beating heart of Chinatown.” If nothing else, this decision may serve as a case study which underscores the merits of restoration versus reconstruction.