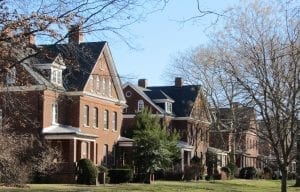 In 2011, SUPERSTRUCTURES addressed the rehabilitation of roofs and wooden porches on 23 stately 19th century brick and wood-framed former officers’ quarters in the historic Nolan Park and Colonels Row sections of Governors Island. We provided investigation, construction documentation, and construction administration services for this once-residential enclave.

On this day in 1637, New Netherland director, Wouter van Twiller, established his estate on what was then known as Noten Eylant (“Nut Island”) by drawing up a deed which was signed by two representatives of the native Lenape. After a long history of military use and, today, redevelopment as a recreational, cultural, and educational magnet, Wouter would hardly recognize the place. But we’re proud to have contributed to preserving examples of the island’s 19th century architecture.