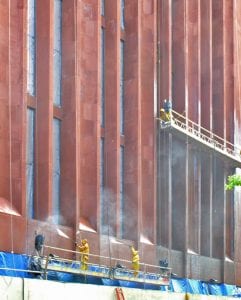 On this day in 1906, architect Philip Cortelyou Johnson was born in Cleveland, Ohio. Among his many works in New York, including 550 Madison Avenue (the former AT&T building) and the David H. Koch Theater (formerly the New York State Theater) at Lincoln Center, Johnson designed the Bobst Library for NYU with Richard Foster in 1972. Clad in red sandstone, the edifice on the southeast corner of Washington Square Park has had its detractors, but remains a distinctive part of Johnson’s New York portfolio.