‹ View All Articles
February 6, 2020
Facades in the Times 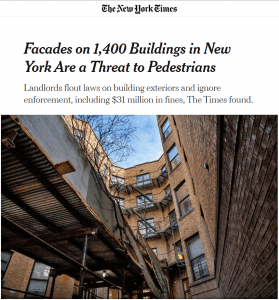 This New York Times article is another in a series inspired by the convergence of two coincidental events: the imminent start of Cycle 9 of New York’s Facade Inspection Safety Program (FISP or Local Law 11), and a tragic incident in which a facade failure caused a pedestrian death. The more rigorous requirements of Cycle 9 were already in the works when that facade failed, but the tragedy served to underscore the need for facade inspections and the potentially dire consequences of neglecting them.

At SUPERSTRUCTURES, FISP inspections and examination reports are just part of what we do. Helping building owners and agents navigate the increasingly complex landscape of FISP is a natural part of our mission, but we also work with building owners to address facade issues before they become inspection issues, independent of FISP requirements. The way we see it, if FISP didn’t exist, gravity and the freeze-thaw cycle of New York winters still would. Read more here.