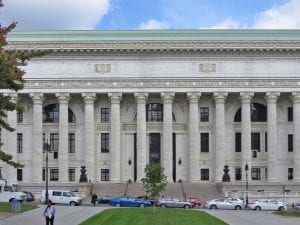 On this day in 1867, architect Henry Hornbostel was born in Brooklyn. With credentials from both Columbia University and the Ecole des Beaux Arts, Paris, Hornbostel worked with various firms in both New York and Pittsburgh. He designed a wide range of buildings and infrastructure, from facilities for Columbia and Carnegie Mellon Universities to the Williamsburg Bridge. His only building in upstate New York is the New York State Education Building in Albany (1908-11), a neoclassical tour de force characterized by a colonnade of 90-foot-high Corinthian columns.

SUPERSTRUCTURES conducted a facade investigation of this Albany landmark, one of the first  projects to benefit from our SurfaceCaptureSM technology which produced a high-resolution image of the facade for inspection. This investigation focused on surveying the extent of deterioration to the building’s Vermont marble and terra cotta elements, documented in a comprehensive report which detailed deficiencies, analyzed their causes, and proposed short- and long-term approaches and cost estimates for restoration.