‹ View All Articles
October 30, 2020
A Haunting Question: What Makes a Gargoyle a Gargoyle? 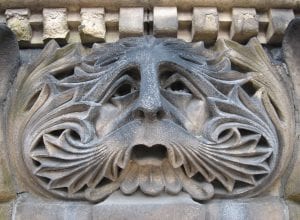 Throughout the city, SUPERSTRUCTURES has encountered some surprising and sinister figures glaring down from parapets and facades. And not just on Halloween, but every day of the year. They menace our team with leering looks wrought in terra cotta, cast iron, and stone. The culprits? Gargoyles and grotesques.

Whether whimsical or diabolical, these characters have a long history of inhabiting buildings—from medieval cathedrals to contemporary nods to pop culture like the Alien xenomorph on Paisley Abbey in Scotland or Darth Vader on the National Cathedral in Washington, DC. But before you call the Ghostbusters, consider a few fun facts about these architectural gremlins:

From collegiate gothic to Art Deco facades, here are some of our favorite gargoyles and grotesques encountered in our work on New York’s buildings (and beyond): 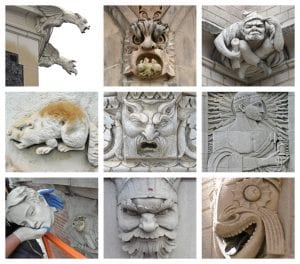 Top row from left: Two downspout gargoyles on a chimney at City College’s Compton-Goethals Hall; A toothy green man from the MacIntyre building; A pensive figure of a scholar from Westinghouse High School. Middle row from left: A stern beaver from the seal of New York on the Manhattan Municipal Building; A fiendish terra cotta face from 345 Adams Street, Brooklyn; An avatar of electrical invention from the Graybar Building. Bottom row from left: One of numerous pupil figures from Haaren Hall; A sly green man from the Hotel Beacon; A chimeric figure that serves as a downspout on Yale University’s Sheffield-Sterling-Strathcona Hall.